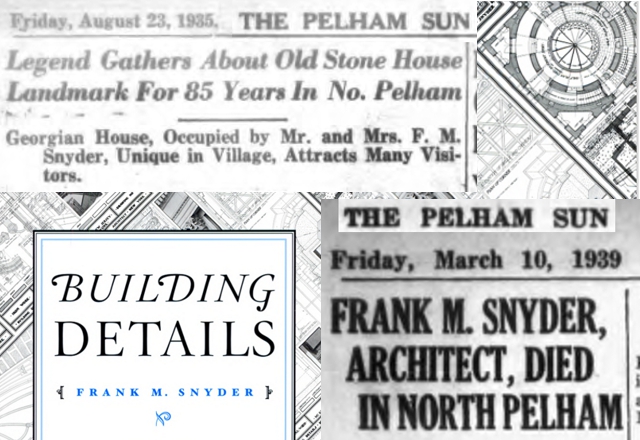 Renowned architect Frank M. Snyder lived in The Old Stone House from 1913 until his death in April 1939.  Between 1906 and 1914, he published “Building Details”, a serial produced in twelve parts over eight years.  It was intended as a design tool for architects, and continues to be so even today. 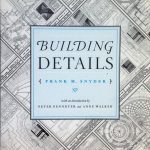 Each issue consisted of ten beautifully executed sixteen- by twenty-one-inch drawings showing details of houses, civic buildings, banks, churches, clubs, and other structures designed by some of the period’s leading architects.  Architect Paul Cret described it as “the architect’s livre de chevet during the period when harmonious proportions and rhythms of composition first began to be understood in this country as elements of beauty.”

For more information, or to order a copy of this beautiful work, click here.

The Old Stone House and Mrs. Parrish, its ghost, were featured in The Pelham Sun on Friday August 23, 1935, while the Snyders were living there.  The article recounts an interaction between Mrs. Snyder and “a lovely lady dressed in richly brocaded velvet”, retells the story of Mrs. Parrish, the burglary and the hidden gold, and goes on to describe the parish house of the Church of the Redeemer – designed by Frank Snyder –  as “one of the handsomest buildings in the community”.  That parish house was deeded to the Town of Pelham in the 1970’s and is now known to us as The Daronco Town House.

Frank Snyder’s death was reported in The Pelham Sun on Friday, March 10, 1939.